The Principles of Striking 1: Breathing 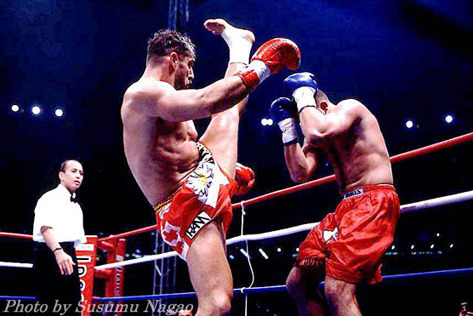 Striking is the art of generating as much power as is humanly possible to incapacitate an opponent. This is defined by the equation, ‘mass times speed over distance’.

Simply put, the variables involved are related as follows: how much the weapon weighs, how fast it travels and finally, how far it travels.

The greatest fighters are masters of this equation and are constantly mitigating and modifying it to get the knockout. After all, there’s no room for discussion when your opponent is laid out on his back.

The martial arts originated in India, thousands of years ago. They were spread through Asia in accordance with travel and trade and as they spread, each culture put their own spin on it.

Martial arts are notoriously conservative; most students who make their way into a fight gym will state their reason for leaving a traditional style as being attached to a frustration with the ‘don’t do it that way, it’s not karate/kung fu/tae kwon do’ attitude of many instructors.

The reason for this is because martial arts are cultural artifacts and preservation of a certain form of kick or punch is essential to preserving the culture they represent.

However, changing a style to suit the shape of the practitioner’s design is as true to martial arts as the kick or the punch itself.

Arguably, modern fightsports began in 1993 with the inception of the K1 Organization. The ‘K’ stands for ‘kakutogi,’ which is a Japanese word used to describe any style of stand-up, striking martial art. Rules were standardized by the organization to provide the most exciting contest possible, characterized by fast-moving action and a high knockout ratio.

The question, ‘which martial art is the strongest?’ has haunted Asia for as long as people have been coming to blows and as a result, interest in the format was strong. Traditional martial arts are also avowedly amateur for a host of reasons, so professional athletes fighting to decision was of profound international interest.

The K1 ushered in the notion of a ‘freestyle’ martial art; there were rules of engagement but as far as style was concerned, you did whatever worked for you. This gives rise to notions of principle; a proven, incontrovertible way of going about it.

These principles are influenced by genetics, previous sporting and fighting experience and notions of how to do it. If the maxim, ‘styles make fights’ is true, the K1 came up with the original recipe for dynamic fighting entertainment.

Ironically, this format had proven Bruce Lee’s maxim; ‘Simplicity is the last step in art and the beginning of nature.’ There are very few definite principals and even they can be warped and bent. Think about these things as fundamental ingredients for success. The way you employ them is up to you.

The necessity of stating breathing as a principle is proof that while everyone does different things well, they all make the same mistakes. The most common mistake is holding the breath to concentrate. Be informed – it doesn’t work! Think about swimming; if you don’t breathe, you sink. Best case, your stroke weakens as you persist.

One of your main considerations as a rookie in an organized competition is time. And everyone says the same thing afterward; time stood still / sped up / or was contorted in all kinds of bizarre and surreal ways.

The truth is, chronological time is a construct. All hocus pocus aside, the only real time any of us experience is the rhythm beaten out against the ribcage by the heart, and its relationship to the oxygen that drives it.

When you breathe, you find your governing rhythm, the master rhythm of your project. It will control your heart rate and feed your muscles. It will also help to keep you calm and centered.

Breathing when striking is essential. The exhalation loosens the muscle, which provides speed. The contraction of the diaphragm at the point of the contact means that not only is the stomach locked – so if you’re struck you won’t be winded – but all the musculature tenses and penetration of the strike is maximized.

Your breathing sets your rhythm. If you seek to impose yourself on your opponent, you must first impose order on yourself. And you do that by breathing.