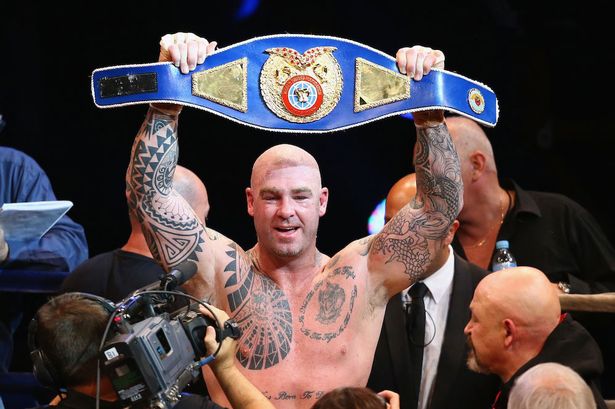 Lucas Browne is one of the biggest names in Australian combat sports. He recently contested the WBA world heavyweight boxing title in Chechnya, successfully wresting it from its long-time Chechen incumbent, Ruslan Chagayev.

Unfortunately, he was stripped of that same title shortly after by the very sanctioning body that had crowned him.

“I don’t blame the WBA; they had to make a decision on a positive test. It’s a six-month ban, the minimum term, and I probably wouldn’t have fought for another six months, anyway. As long as I don’t lose any money or my ranking as number ten in the world, I’m okay with it.”

The ban comes as a result of Browne testing positive for the banned substance clembutarol after the fight. While he isn’t disputing the outcome of the test, he had taken his own separate measures previous to that test.

“We didn’t trust the Russian anti-doping people,” he says. “We – when I say ‘we’, I mean Team Hatton – employed WADA to do independent testing and we paid for it ourselves. Three or four days before the fight at breakfast in Chechnya, I gave both blood and urine samples before I went back to my room and those [tests] came back negative.

“So, I was completely clear. I paid for the testing. Why would I take something which was going to affect my heart and has no benefit in terms of losing weight because I’m a super-heavyweight?”

Given the fight took place in a foreign country, Browne and his team were fastidious with every aspect of his preparation in the lead-up.

“Taking a tip from Tyson Fury, we were very careful with the water. We didn’t trust anybody. I ate at the hotel to be extra-careful. On the night of the fight, we were tested again via urine sample. It came back showing minute traces of Clenbutarol.”

As to how a tainted test could be administered, Browne has his theory.

“There were two weigh-ins. One was in the hotel the day before. Because it’s a Muslim country, women can’t see anyone in their underwear. That night, there was a sort of public pre-fight extravaganza with a mock weigh in. Dancing, all that sort of stuff. We stood on the scales in full clothing and our weight came up on a screen behind us.”

“At dinner afterwards, steaks were served to only the fighters. My speculation is that it was only the steaks. It was [the promoter’s] complete and utter insurance policy. No matter what, Chagayev keeps the belt.”

Other than a disappointing outcome, Lucas was happy to pay a visit to Chechnya.

“It’s a completely Muslim country,” he says, “Islam at its finest. No alcohol, no smoking, no tatts. A lot different to Sydney. Very polite people; very considerate and down to earth. I didn’t see a single argument or dispute of any kind. Everybody had machine guns, but that’s a different story.”

And while they are a nation of fight fans, their enthusiasm is much greater when the local fighter is ahead on the cards.

“After the ref waved it off, I put both my hands in air and yelled out ‘Yes!’ There was not a single sound. The crowd was completely silent. My corner jumped the ropes; they were jumping around, they were so happy. I told them to shut up: we looked like idiots!

“There was no sound [from the audience] and they didn’t warm up. The president had a go at things, and then got the shits good and proper. Chagayev said something over the microphone, and the president walked out. I asked if I could talk, but they wouldn’t let me. ‘Okay, see you later,’ I said. And then I was off to the changing rooms.”

The president had a vested interest in the outcome, given he was also the promoter.

“The president was also Chagayev’s best mate. I was staying in a five-star hotel, while Chagayev stayed in the presidential suite, which is the president’s accommodation.”

Lucas describes Chagayev as a respectful person who let his abilities as an athlete speak for him.

“There was no trash talk, just the fight. He was spurred on by the crowd. A very cagey, very technical left-hander. [Being a southpaw] creates a different dynamic. That was the hand that caught and dropped me; I didn’t see it coming.

“It was a right body rip, and I bent and looked and it was the other hand that came over the top and knocked me down. He had a lot of power. He was very sharp.”

Due to the positive drug test, Chagayev also keeps the belt.

“He’ll fight the American, Fres Oquendo. I have a six-month ban, so I’ll be back in September, ready to smash everyone. It’s given me a level of determination. I’ve well and truly now got something to prove. Winning it back makes the story so much better.”

“In the Chagayev fight, [Lucas] executed fifty per-cent of [what we’d planned], if he was lucky. What he did execute is what got him across the line.

“If he’d had a fight the next night, he’d probably have been able to execute eighty per cent on the confidence and trust factor alone. Our job now is to keep working on those skills and reinforcing them.”

Rodney became involved with Lucas after he was suggested to him through a third party, after he had left Jeff Fenech.

“It didn’t work out as well as I wanted it to,” says Lucas. “Jeff wanted to manage and promote me, but I already had a promoter and manager through Team Hatton. He didn’t put the effort in. I guess he didn’t get what he wanted out of it.”

Rodney Williams had begun to forge a reputation as a skilful professional boxing trainer after working with both Nigel Benn and his son, Connor. By the time he was introduced to Lucas, Williams had already begun to develop an understanding of him as a fighter.

“I was in the opposite corner when he fought Chauncey Welliver. Lucas won by stoppage, somewhere in the fourth or fifth round when he broke Chauncey’s orbital bone. It gave me the chance to look at him from the very front row, so to speak. I wasn’t that mightily impressed, to be honest – as a fight fan, he wasn’t the sort of fighter I would follow.

“There was nothing terribly exciting about him. I did have that conversation with him; I think I described him as ‘Frankenstein with gloves on’, or something to that effect. That said, he has the three things any trainer asks a fighter to bring to the table; a big heart, a good chin, and knockout power.

“The main thing I said to him was that you’re great when you’ve got the ball, but when you don’t, there’s nothing exciting going on. When you’re not punching, you don’t look dangerous.

Now that Lucas is acquiring the skills to match his size, his sights are set on finding the most compelling contests on offer. His outlook on the heavyweight division is indicative of his approach.

“The best thing for heavyweight boxing was when Klitschko lost [to Tyson Fury]. Don’t get me wrong, he’s a sensational fighter, but too clinical and too boring and he’s held the title for too long. It’s opened the door for everyone else.

“It’s creating hype in the heavyweight division, as it needs. I’m hoping Fury gets [the win in the rematch]. That said, I think Klitschko will come out, all guns blazing.

Lucas also has a few choice words to say about Fury.

“He’s a genuine nice bloke, but put a camera on him and he turns into an idiot. You can’t argue with it, though; he creates sales, and he can back it up. I’ve spoken to him many times. He’s a top bloke.”

Lucas began his career in combat sports after his divorce.

“After my wife and I split up, she moved everyone to Perth [from Sydney]. My thought process was, I’d been a full-time dad, I looked at myself and thought, ‘Let’s give it a try and see what happens.

“My background was in rugby as a teenager, so getting in amongst it wasn’t daunting. I’d also done thirteen years of security, so being in a fight didn’t faze me. I actually felt calm; I didn’t have to worry about being bottled in a one-on-one fight, and the ref is there if something goes wrong.”

“I was five and 0 when I won the XMMA intercontinental title. For my sixth fight, I fought Daniel Cormier. I couldn’t wrestle him for shit – he dominated me. He elbowed me [on the ground] and I got thirteen stitches for the cut. I got done in that regard. Both my losses were to wrestlers, and I’m not a wrestler.”

It is often said that in life, one finds out what one wants to do by doing things one doesn’t.

“At thirty-one, thirty-two, I didn’t want to learn to wrestle. All my KOs were [by] punches. I didn’t even kick. I threw two kicks in my first kickboxing fight, and in my second I threw one knee, and that was it.

“That fight would have gone to him on points, but I KOed him in the fourth. A very good example of why I don’t want to do kickboxing! Boxing is easier for me, so to speak.”

While it may be easier for Lucas, one cannot imagine that it would be easier for anyone climbing through the ropes to mix it with him.

“There’s quite a few fellas, actually. I’m good; I don’t hurt people or knock them out [in sparring]. I probably should in terms of my personal gain, but I also realize I’ll have no sparring partners if I do that.

“As far as my hands go, it’s probably an eighty per-cent split where I use my left more. When I fight, I turn it other way around. Sparring is all about learning. I’m keen to learn from other people and they are keen to learn from me.”