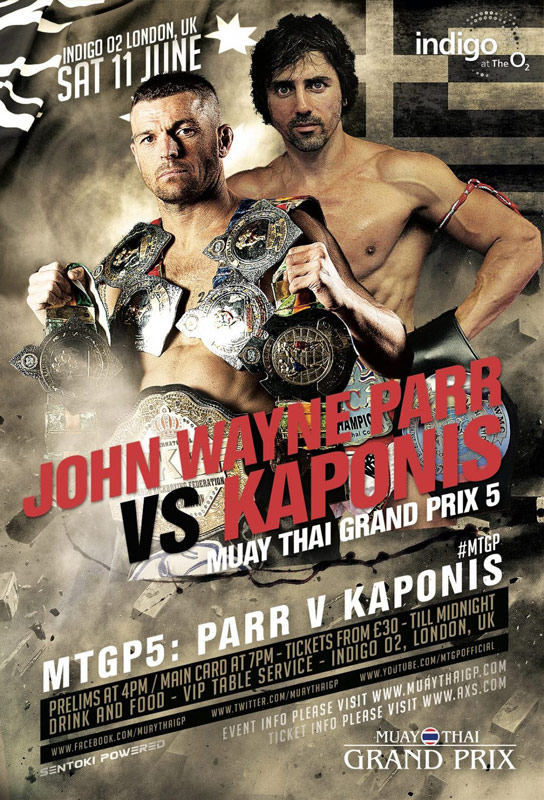 Pavlos Kaponis is ready, hungry and looking for blood.

“John Wayne Parr is famous not only in Australia, but also all around the world and this is respectful,” says Pavlos, starting out with a congenial foot forward.

“In Greece, we know him very good from the fight that has given with Mike Zambidis. Especially from the last one that Zambidis lost by KO. However, these fights were K1 [rules].”

Zambidis’ loss made all the greater impression on Pavlos, due to the fact that he was part of the team forced to eat humble pie.

“I have respect for this guy. To be honest, I have met him at 2009 when Zambidis lost by decision. I was Zambidis’ trainer back then. I had design the appropriate strategy for Zambidis to beat him but unfortunately, it was not me fighting…”

Kaponis believes that he has the Hellenic recipe to correct the imbalance in Parr’s most popular choice of cuisine.

“Ours will be a different and much more interesting style, the Muay Thai. This time, I will be the one who will be in the ring and the result this time will be different!”

Wayne isn’t intimidated by the bluster of aspiring champions. It has been a staple of his diet since he won his first world title, back in the year 2000.

“I’m one hundred per cent; I feel fantastic,” says Parr. “I’ve been running the last few weeks. No injuries, no pains. I’m quietly confident this will be a great fight.”

As far as being forced to digest something he hasn’t seen before, Parr is unfazed.

“[I feel] good. Just normal. I’ve fought in gloves one hundred and twenty times. This is just another day.”

Kaponis is quick to expound on the credentials that entitle him to share a ring with one of Muay Thai’s most successful proponents.

“I have fight with much more experience fighters than JWP. My last opponent in the WMC I-1 Grand Prix last November had 218 fights [for] 197 wins. I knock him out in the second round and get the WMC Belt…”

While Kaponis is enthusiastic, he hasn’t forgotten to demonstrate appropriate respect for his opponent.

“Parr is the most Legendary fighter that I will have the honour to share the ring with, not the most experienced one. And also bear in mind, experience is one factor that affects the fight. There are plenty others to take into account.”

Parr is less concerned with any stepping-stone into the spotlight. For him, the motivation is more personal.

“After my loss to Brad Riddell, I’m looking for redemption.” 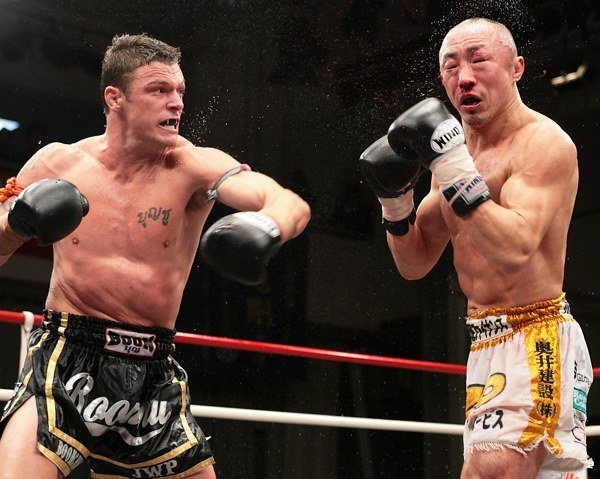 Wayne fought Riddell under full Thai rules with MMA gloves on his own promotion, CMT 8, on March 4.

“I got caught early with a left hook to the temple. During the eight-count, it felt like everything rattled. For the next three rounds, every time [Riddell] touched my jaw or the side of my head, I’d lose all control of my body.

“From what I can remember, I think I got dropped four times in total. I was fighting on automatic for the three rounds [after]. I remember at the start of round four, everything becoming clear and perfect.

“The fourth and fifth were my best rounds, but by then, it was too late; I had two eight-counts against me.”

As always, Wayne is quick to focus on the positive.

“The good thing about losing to Brad was that at forty years old, I can still get knocked down and recover enough to win those rounds on the cards. My chin isn’t gone, I just got caught early with the MMA gloves.”

The possibility of Parr being previously tenderized isn’t a positive or negative, as far Kaponis is concerned.

“Look, as I told you before, there are plenty of factors to be faced. I also told you that I respect this guy and I do not calculate that perhaps he has much more wear and tear than me; I will train real hard for this fight.”

Pavlos has always loved Muay Thai and sought to walk in the footsteps of his heroes.

“Muay Thai was not very famous in Greece before. However, I loved it since I was a kid. It was difficult for me to train Muay Thai when I started in 1990 because those days in Greece most of the people were practicing kickboxing in [the] full-contact style (not even low kicks).

“However, my love for the sport of Muay Thai helped me skip all obstacles. I travel to Thailand many times and to Manchester [in the] UK to work with my Master, GM Sken Kaewpadung and finally I succeed to do what I love; fight and teach Muay Thai.”

“I done my first pro fight before twenty-one years ago. Wherever and whenever I could go and fight Muay Thai, I did it! I have been around the world doing it and I will keep on doing it as much as possible!” 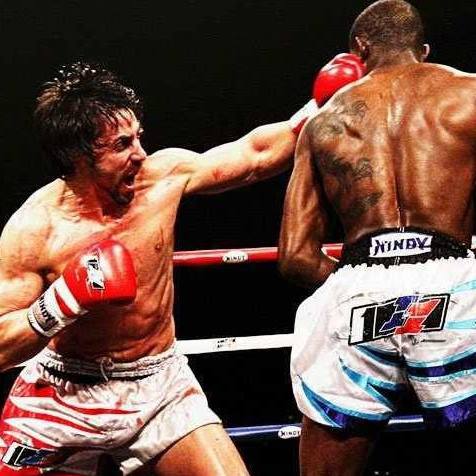 Naturally, it’s an alphabet-soup of titles and organizations.

“On various weight scales, my titles [and] major victories are the following ones:

As with all those fighting at a lighter weight, food is always lurking somewhere toward the back of his mind.

“Usually I fight between sixty-six and seventy-two kilos max, but for this cowboy I eat all my food and fight at seventy-four kilos, no problem.”

Parr is more relaxed and less effusive. When asked what he knows of Kaponis, he says,

“Right now, absolutely zero. The promoter rang me and asked, ‘Can you fight in London at this weight for this much money without an opponent?’ [Kaponis] was announced a couple of weeks ago. Right now, I’m focused on getting fit.”

Once Wayne hits his mark, he’ll turn his attention to working out what to do with the Greek.

“Four weeks out, I’ll make a game plan on how to fight him. There’s been no study as yet. I’ll sit down, get onto Youtube and watch a half-dozen fights, work out his strengths and weaknesses and try to capitalize on what I can.”

As is always the case with Parr, he has one person, or group of people, at the forefront of his mind.

“My main concern is getting fit and fighting aggressively to put on an entertaining fight for British fans. Hopefully, if it’s exciting enough, I’ll get invited back again.”

The Muay Thai Grand Prix is making a splash in Europe.

“They’ve done five shows so far,” says Parr. “They are fast-becoming one of the UK’s number-one promotions. They’re spending the dollars to put [this] show on at the O2 Arena. They’ve done a deal with Greece for the TV rights, hence why I’m fighting a Greek to generate strong ratings.”

Again, the people coming to the show are at the forefront of Parr’s concerns.

“The best part was that the internet went crazy. People started tagging their friends on Facebook to see if they wanted to go. Given that we live on an island and they live on other side of world, it’s great that people want to see me fight. I enjoy the rush of going international and flying the Australian flag.”

Pavlos speaks well of the MTGP, having been one of their marquee fighters for some time.

“I can’t wait. I have been there already two times. I love to work with [the] UK promoters of [the] Muay Thai Grand Prix and as far as the [size of the audience] is concerned, believe me, it will work for me, not against me. I have done it before, I’ll do it again…!”

As is typical of an experienced campaigner, Wayne is far more concerned with the ingredients, than the glossy picture in the book.

“I’ll take my mate Kevin Dick to help me out. He’s now one of New Zealand’s biggest promoters. I’ll also take Dr Phil Bailey as well, in case of cuts or damage. If I’ve got my ‘A’ team, I’m in good hands.

“The best part is that it’s summertime over there. By all accounts, during the daytime, it’s warm rain, rather than cold rain.”

That said, Kaponis lacks neither ambition, enthusiasm, or heady predictions to season his forecast.

If the Riddell fight is anything to go by, that depends on how hard Kaponis manages to hit him. 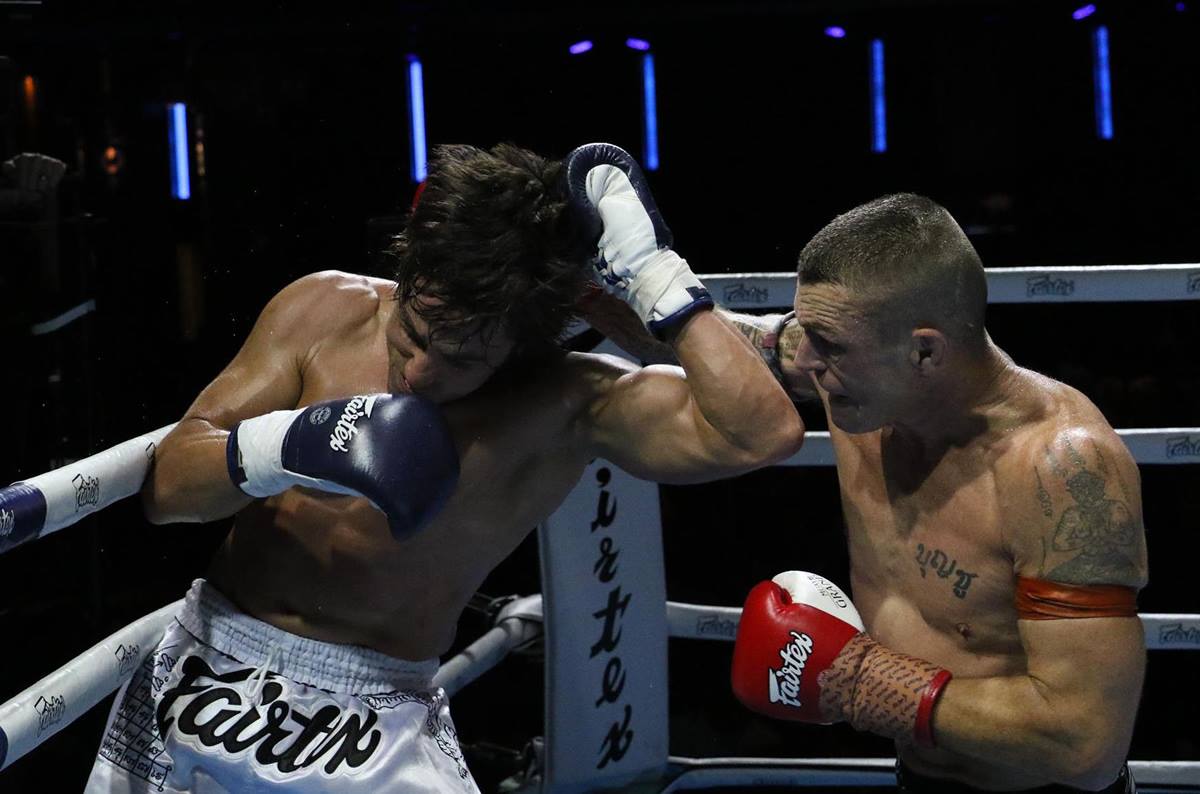