The Straight View from the Middle of Mardi Gras

This article was originally published in The Age and can be read here.

I received a call last year while sitting at home, doing nothing. A very large man who was to wear a costume crucial to the success of a float in the Sydney Gay and Lesbian Mardi Gras parade, had come down with chronic food poisoning. They needed a body, gay or straight, and asked if I’d be up for the task.

“What time do you want me there?” I asked.

And suddenly, I’m almost completely naked. Dancing to Jessica Mauboy. In front of thousands of people. And everybody loves it.

Club Elleven in Oxford Street is windowless and all the lighting electric. The only sunlight came in splashes through the fire door, when people went out to smoke cigarettes or spray glitter on one another. 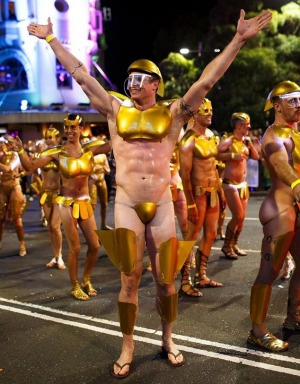 People stood around in various states of undress, chatting, being made up and having their costumes fitted. For the marchers, the day of the Mardi Gras parade is one long party.

Elizabeth, a butterfly, had most of her costume on. The wings were last to be mounted. Wings can be cumbersome and heavy and would surely make the ascent up the nightclub stairs to the street immensely difficult. “I’m always up for trying the ridiculous,” she said. “A friend of mine, Feycal, who works with me, had done [the parade] in previous years, which is how I got to know about it.”

I was doing an exceptional job of looking into Elizabeth’s eyes, given she was standing in front of me, topless. “Are you gay?” she asked. Perhaps I was not doing such an excellent job after all. She moved to cover her breasts, and then shrugged her shoulders. “Oh well,” she said.

For the Housewives on Fire team, the parade started many months before the big day. Olivier Debiais, Max Inanli and his wife make bespoke fetish couture and began working on the parade some years ago. Olivier, a seasoned French fashion designer, produced the costumes for the 2008 Australian Olympic team.

“There was a lot of criticism at the time, because I chose to do the uniforms in blue and white, rather than green and gold. What people didn’t realise, though, was that they were designed to reflect light. Once the photographs came out, it was a different story.”

The Housewives have employed light as a central theme on their last two floats. These costumes were delicate and complex, held together with all kinds of subcutaneous wires and straps, many of which housed connectors for LED lights. A vigorous French shouting was heard more than once. Max remained quiet and fumed, more often than not with a wire between his teeth.

The design traced a kind of insectile metamorphosis as a metaphor for the process of identity a gay person undergoes. The larvic marchers were constructed predominantly from Perspex and as evolution progressed, there was more flesh and light, with an effusion of carapaces and wings.

Once dressed, we assembled on the footpath in the late-afternoon sun and made the walk from the club, across Hyde Park to where the float waited in College Street.

As daylight faded, my energy waned. I had been standing for hours and my legs hurt. Other floats had their own DJs and their music overlapped, leaving us battered in the middle. My feet ached, and so did my back.

Over all this washed the light that shone down from the Australia Museum, one of the oldest buildings in central Sydney, uniting us in an alternating spectrum of the colours of the rainbow flag.

Because other costumes were predominantly fabric, they were shaded by various depths of night. Our costumes, however, were hard and reflective so the light flowed over them, augmented by the LED strips embedded beneath contours, visors and headpieces.

Eventually, the Brazilian float beside ours and the gay Irish behind made their way along the parade route. Olie was now outfitted in coils of transparent, luminous Perspex while Max, dressed entirely in black, ensured that wings, headpieces and other organs were lit and glowing. The Housewives’ float crawled forward. Jessica Mauboy belted out Beautiful over the PA at a volume worthy of Motorhead.

The crowds that mounted either side of Oxford Street were poised and roaring like the Old Testament waves that swallowed the Pharoah. Everywhere you looked there were eyes, riveted upon you. Each contact resonated like a stroboscopic flash. Thousands, one after the other.

Wings and plumage, along with glitter, have long been the dominant tropes of Mardi Gras. While I have no story of beginning life as an alien and having to undergo a painful evolution, I can relate to the stories I’ve heard here, having been a dowdy, boring, small and skinny teenager, tormented all through school.

And suddenly, I’m almost completely naked, save for a jockstrap, glitter and fairy lights. Dancing to Jessica Mauboy. In front of thousands of people. In the middle of Taylor’s Square in Sydney. And everybody loves it.

Then, the final float approached and ours began to roll away.

The crowd petered out along the route to the final destination of the park. The darkness encroached, street lights diffused through the canopy of trees. The parade was soft and distant and much of our own fanfare dashed away across the open parklands.

My feet no longer hurt; my back felt fine. I just wanted to hang onto those last rags of light, even as they were slipping away.