I’d wanted to be a writer all my life, but I didn’t get published until I’d made it as a pro kickboxer.

International Kickboxer Magazine wrote a feature profile article when I joined a major European kickboxing team, based on an interview conducted via email. They offered me a job afterwards and for the decade since, I have written for International Kickboxer, FightLive Magazine, Fight! Mixed Martial Arts Magazine and Blitz Magazine.

That led to work for IronEdge, the number one suppliers of hardcore gym equipment to the Australian Defense Forces, professional NRL and AFL teams as well as Crossfit boxes nationwide. I wrote magazine articles, produced advertising copy and maintained the website.

I’ve written a number of novels which have been published in excerpts in The Review of Australian Fiction. I’ve also written for The Age Newspaper and had essays published in Island Magazine, one of Australia’s foremost literary magazines. In recent times, I’ve begun to make regular appearances on ABC Radio National’s breakfast show, ‘Life Matters’, to discuss fitness and exercise.

There’s no such thing as slick. It’s either real or fake; you either feel it or you don’t. The blank page is exactly like the ring or the cage. The enclosure, the rules and the skill set define the territory. What comes next is the adventure.

Blood, sweat, fear, adrenalin and cortisol. And truth. And everything else worth bearing witness to as a reader, or a spectator. A spectacle of profound intimacy from which no one emerges the same.

Give me the territory, and I’ll bring you the adventure. 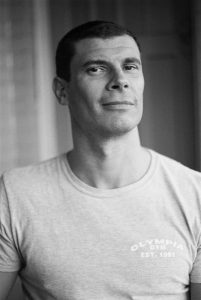