In the Hands of the Judges: Ben Cartlidge 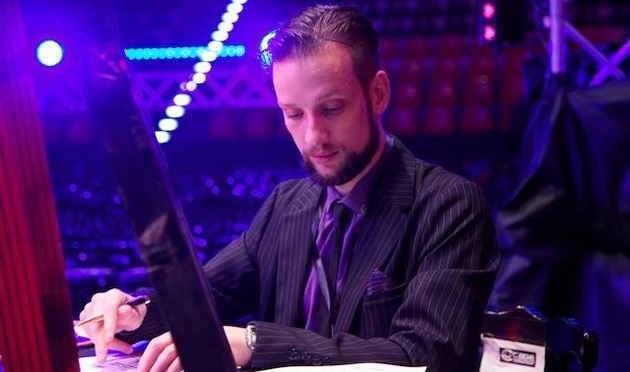 Ben Cartlidge understands judging. That assertion is backed up by the largest MMA organizations worldwide: Cage Warriors in the UK, KSW in Poland and, of course, the mighty UFC.

As enormous as the fan-base of MMA has become, an understanding of its intricacies has not developed in proportion to its growth.

Like many fans, Ben’s interest grew from an adolescent fascination.

“My best friend and I watched a lot of kung fu movies; early Jet Li and Jackie Chan. One day, we went to video shop and discovered UFC2. The first fight was Royce Gracie against a Japanese karate guy.”

The boys were about to witness the ultimate confrontation between fantasy and reality.

“The karate guy started off with kata. I thought, ‘He’s going to do a dragon punch!’ Gracie took him down immediately. It mystified me. I watched it on and off; watching the sport grow, developing an understanding. I was enthralled by it.”

His own practice of martial arts was a crucial part of that understanding.

“I did various things as a kid; Shotokan karate for three or four years. Once I got into my teens I stopped, and playing video games and BMX bikes took over. Then, in my early twenties, I got back into Shotokan. In 2005, I said to this friend I was training with, ‘What are we doing? This is boring.”

Around about that time, The Ultimate Fighter was making its way onto English television screens.

“Season three featured the first British guys; Ross Pointon, Michael Bisping. We discovered that Ross didn’t live far away, so we went to his gym. He was running a no- gi submission class. We did it and we were hooked. Both of us went for years.

“I got more involved with different shows in different locations. I’ve got a friend who owns a fitness gym, he’s a BJJ blue belt. I go down there and do some training. Hit the pads; roll a bit. It’s good because I don’t have to worry about affiliations.”

That ongoing interest in participation has fostered a deeper understanding. 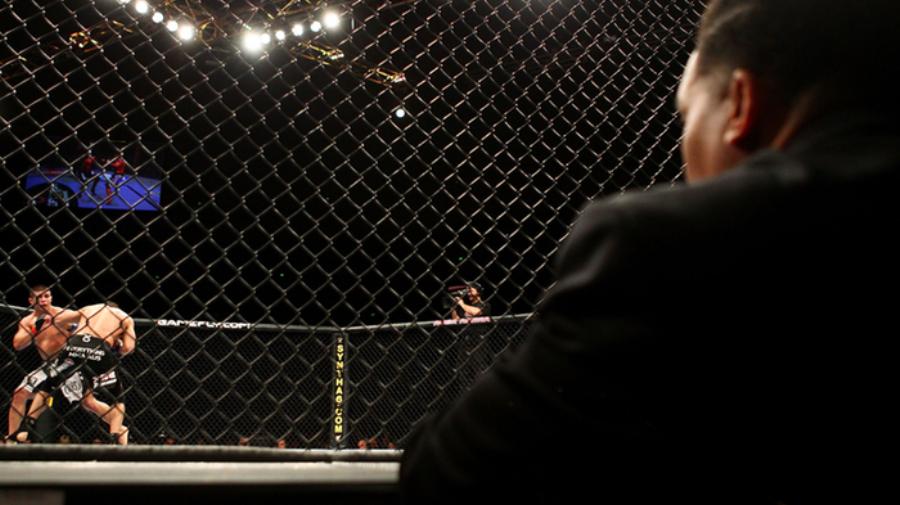 “I like to sit and watch instructionals. You realize that people are still coming up with new techniques. You also see people reintroducing old techniques. You can see how they fall into consciousness, like when Anderson Silva front kicked Vitor Belfort at UFC126.”

Ben demonstrates an encyclopedic knowledge of fights and fighters, which is indicative of his breadth of knowledge.

“After that, there was a wave of front kick knockouts. Lyoto Machida caught Randy Couture at UFC129 with a crane kick. His arms were in the same position as Daniel-San’s [in The Karate Kid]. Like Miyagi says, ‘If done properly, no can defend.’ That’s advice for life, to be honest.”

Cartlidge’s eye for detail saw him predisposed toward something special.

“I tried a few different roles within MMA events. I did some work as a commentator. It was interesting, but I didn’t find it challenging. I was also writing a little bit. I did press.

“Then, when I began judging, I got a sense that this was what I’d be best at. It was the thing I enjoyed the most. That was in 2010, doing regional shows in the UK.”

There was a need for solid, insightful judging of MMA at a grass-roots level.

“Shows in the UK… a lot of promoters, judging is the first area they cut corners. The promoter will splurge on five ring girls and get his mates judging. The priorities are in the wrong order.

“These are professional fighters; this is their opportunity to make a living. If you’re not taking it seriously, you shouldn’t be doing it. It’s people’s lives. You have to take it seriously.”

‘Taking it seriously’ means exactly the same thing for a judge as it does for a fighter: you need to know your craft and then invest the time to practice it.

“You need to know the criteria inside and out; know what you’re looking for,” says Ben. “There are millions of fights on-line. Go to youtube and find what you want. Then, get yourself a pen and paper and try to judge it.

“Look at KSW, UFC, or Cage Warriors and then look up the decisions recorded on the ‘MMA Decisions’ website and cross reference your score against the judges. Then, look at the criteria to check how you arrived at your answers.”

Just like fighting, experience is the most important factor and just as the resume of an elite fighter will record the quality of the shows he has been included on, so too does an elite judge.

“I still do UK shows; it was through that I got the experience that anybody needs. At the start of 2012, I was called by [UK promotion] Cage Warriors. I started with their crazy international schedule, but I was ready for it because I’d put the time in; I’d spent time practicing the craft.

“Marc Goddard says about the UFC, or any big show, that ‘You graduate to, not from the UFC’. You have to have your skills in place. You don’t want to be learning on the job on a massive scale.”

Having the skills in place is about knowing the criteria and understanding them in the context of a real fight as it is unfolding.

“The system is what’s called a ‘ten-point must,’ which is derived from boxing. Somebody must be awarded ten points in the round, before deductions for fouls.

“They kept the same point system for MMA, but the criteria needed to be adapted to take in grappling. That’s where it gets interesting. Each criteria has separate weighting depending on how prevalent it is in a round.”

The four criteria are defined as: effective striking, grappling, octagon or cage control and effective aggression. 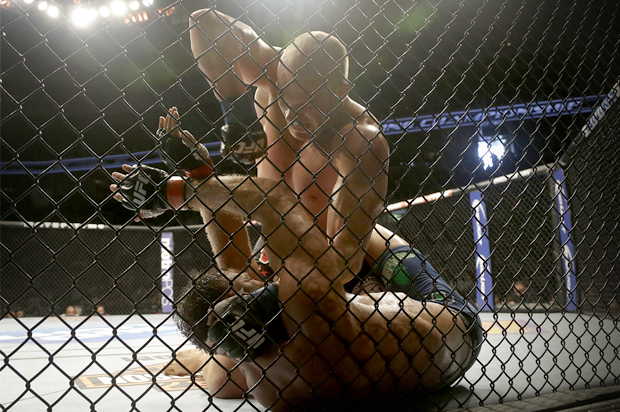 “Effective grappling is defined as the number of successful executions of a legal takedown, reversal or submission attempt. Of striking and grappling, your judgment of the importance of each is weighted as to the make up of the round.

“A judge presiding over a round which features four and a half minutes of grappling and wrestling transitions and thirty seconds of stand up will weight the round accordingly when awarding the final score.

“Effective Aggression and Cage Control are very useful criteria because in rounds that are close, they give a differential point, rather like the idea of getting an ‘advantage point’ in competitive jiu jitsu.”

“You get standard point denominations in BJJ, like a lot of sports, but there are certain techniques that you can do that don’t score points but you’ll get an advantage. If nobody scores any points or the score is tied, an advantage point is a way of picking out a winner. Aggression and cage control are like that in a lot of respects.

“Cage Control is simply dictating the pace, place and position of the fight. Place is more specific, like up against the cage, for example. ‘Position’ might mean a certain position in the clinch or, more logically, on the ground. Effective aggression is moving forward and scoring legal strikes or attacking from the guard with submissions.”

Most controversy about decisions emerges in regard to striking, particularly from misconceptions related to damage.

“Damage is a funny one,” says Ben. “Facial damage or bruising is really a byproduct of effective striking. The problem with damage as an indicator is that it isn’t a level playing field. There are genetic advantages you can’t legislate for. If a fighter has had more fights than someone else and has more scar tissue, they’re more likely to cut up.”

The issue of damage is becomes more complex the longer it is discussed.

“The other thing is, different skin tones don’t show bruising or blood. ‘Damage’ is something we try and move away from. It’s not fair; not objective. ‘Effective’ means that the fighter is judged on legal strikes that land.”

“If a guy wins a fight with some takedowns and control, but gets a black eye and [sheds some] blood, people say, ‘Look at his face, how can he have won that?’ The thing is, you’re judging each individual round.”

While the ten-point must has adequately served the sport of boxing, it is yet to be clearly understood by most spectators in its MMA incarnation.

“The thing about the ten-point must [is there are a] lot of misinterpretations. The system we have is certainly fit for the purpose; it’s more a case that some people don’t understand what judges are looking for, and that’s the most common misconception about decisions.”

Ben’s acumen and experience has led to his employment in the world’s largest MMA organizations.

“I’d been judging with Cage Warriors in 2012. Near the end of that year, I ended up working an event with the UFC. They originally got me in to ‘shadow judge’, which is the process for anyone who starts. You score, but your cards are assessed after the event as a competence check.”

Evidently, the shadow judging was successful because Ben soon received a call to take on greater responsibility.

“They got in touch with me and discussed opportunities going forward. It’s a dream come true. It’s always super-exciting [to judge a UFC show]. It’s a real honour. So far, I’ve worked in Brazil, Japan, Singapore, Macau, and quite a few in Europe as well.”

Cage Warriors have also depended on his services for a number of their international shows.

“I’ve done Cage Warriors shows in the Middle East; Jordan, Abu Dhabi, Dubai and Bahrain. I even did one in Chechnya. I got sent an article about how to survive in Russia by a friend of mine; it said you should grow a beard so you look less like a tourist and don’t get kidnapped. I’ve still got the beard. It must have worked; I’m still here.”

“They sent me a message inviting me to do KSW29 last year, in December. I’ve worked with them ever since.”

Ben reserves a significant compliment for the KSW organization.

“It’s straight out of Japan; real Pride-era. They embrace the entertainment element. There’s a gala quality to their presentation and production.”

That said, there’s no confusion where Ben’s ultimate allegiance lies.

“UFC will always be biggest show in the world. They’ve got that brand recognition that has become bigger than the sport. They’ve made it more acceptable; more accessible. It’s developed at an astronomical rate.

“If you told me [when I was] sixteen, seventeen years of age that this [sport] would be filling arenas all over the world, I wouldn’t have believed you. Originally, it was marketed it as a blood sport. Now, it’s a legitimate sport, screening on a major US network, syndicated all over the world.”

The recent show held at Etihad stadium, UFC193, is testament to this.

“It was unfathomable that the UFC could put on an event headlined by two female title fights and pull that sort of crowd. As an organization, they are prepared to push boundaries and give opportunities.

“The show itself was well-attended and received an excellent reception. People will be talking about the fights on that card for decades.”

Naturally, the main event is what I wanted to talk about.

“People will talk about [Rousey and Holm] for twenty years. It was one of most significant events in the sport. How it happened; how high-profile it was. The UFC is committed to putting [those shows] on. They are committed to bringing shows of that size all over the world.”

It follows that judging must be of similar standard. It is important that fans become familiar enough with the criteria to follow that development and, more importantly, participate in it to maximize their enjoyment of the sport.

The judging criteria for MMA are available at: 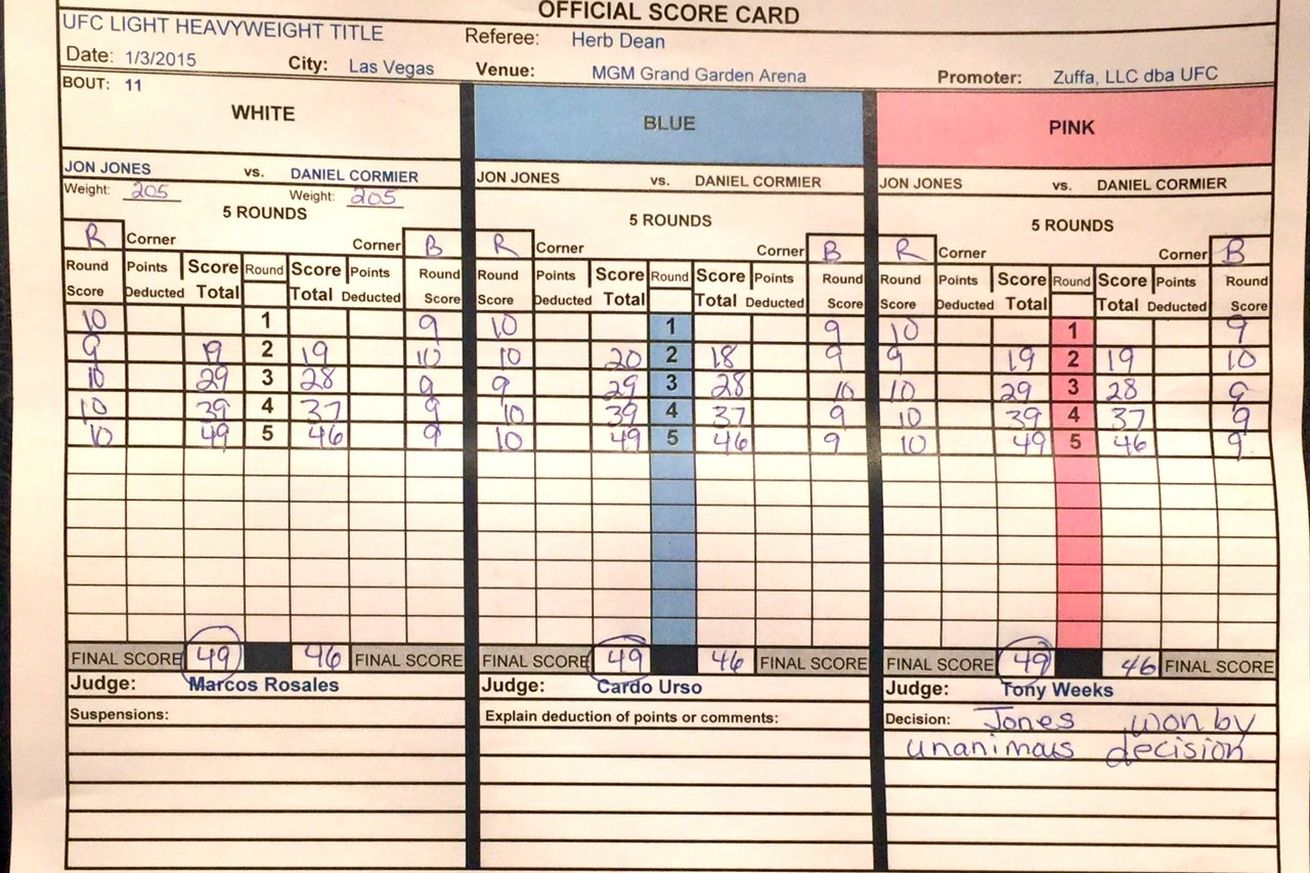