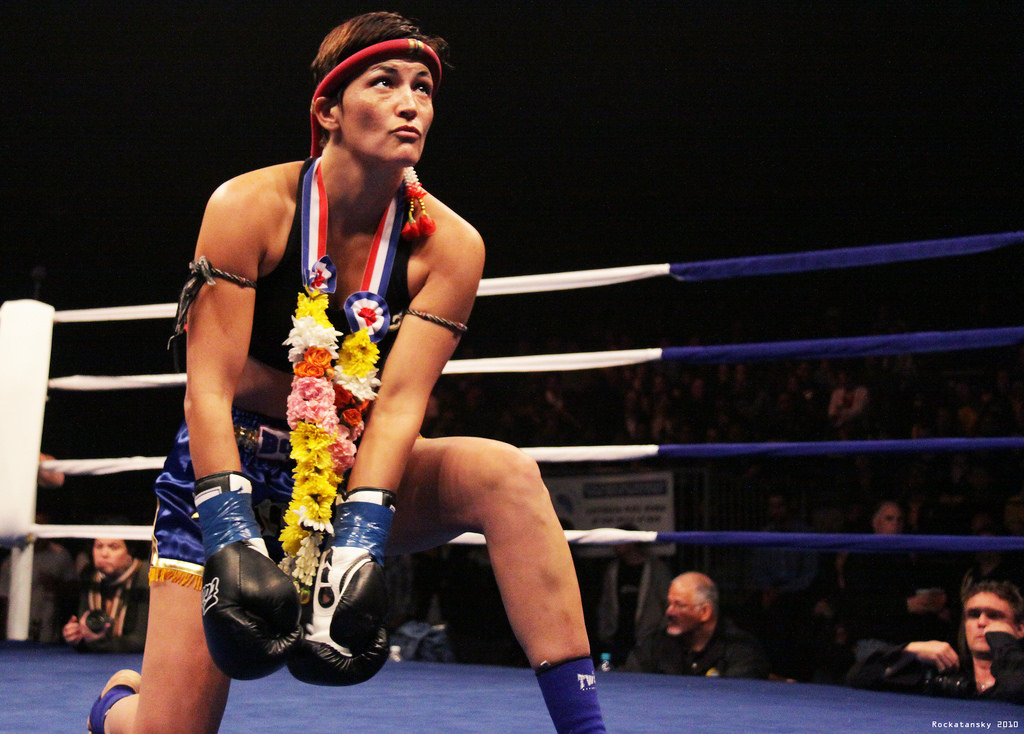 “Don’t you cry; don’t you dare cry,’ I say. “And I’ll always reprimand her if she hits like a girl.”

Very few trainers could get away with giving instructions like that, unless the trainer has been told the exact same thing.

Muay Thai lays claim to a strong culture in Australia, and by 2016, there are not only women fighters, but a generation of women that have worked through fight careers to become trainers themselves.

We don’t need to interview men about training women. There are enough skilled and experienced female trainers, former fighters themselves, to answer all the questions.

Boonchu Gym in Burleigh Heads, Queensland is the home of ‘John’ Wayne Parr and his wife, Angie. They met in Las Vegas at Mr Toddy’s gym while Angie was training and fighting out of it. As a veteran of forty-seven fights, she knows what it takes to get the job done.

While a woman is anatomically different to a man, the major differences in training pertain to the psychological.

“Women tend to cry a bit more,” she says. “I know what it is to be pushed to tears; being a woman is not an excuse. Women cry, men don’t.”

Tears are a good indication of a trainer getting a fighter to reach the outer limits of their potential.

“When women get a bit teary, that’s when I know they are reaching their limits, and that’s what they need to fight. It’s a big part of it.”

Angie knew she wanted to fight early on.

“I started fighting at seventeen,” she says, “But I really started fighting in the second grade. I was willing to take on a boy. If they were hyper, then I’d challenge them. I remember even boxing with one of my male friends when I was eight years old.

“I wanted to do karate, but my parents couldn’t afford it. I fought with my sister, brothers and boys at school. It’s the challenge; I love fighting.”

Angie recognised that desire to fight when it was expressed by to her by her daughter, Jasmine.

“Jasmine asked when she was seven years old, but we made her wait until she was eight. We took her for runs, made her skip rope; she did pads with mom and dad, and sparring with other kids.”

Surprisingly, most of her sparring was against boys.

“A lot times she cried,” says Angie. “They got the better of her. She doesn’t cry now – she knows better. ‘If you’re afraid to get hit in here [at training], you’re going to be in trouble out there,’ I’d tell her. ‘I know it hurts, but whatever, you’re fighting. It’s not ping-pong.”

The methods of training, as far as the physical is concerned, are identical.

“They [men and women] train exactly the same way. She has to do the same things. It’s the same getting hit; the same conditioning. Women don’t have as much muscle mass. They’re never as strong as a male counterpart. They can work to keep up with guys, but they struggle.” 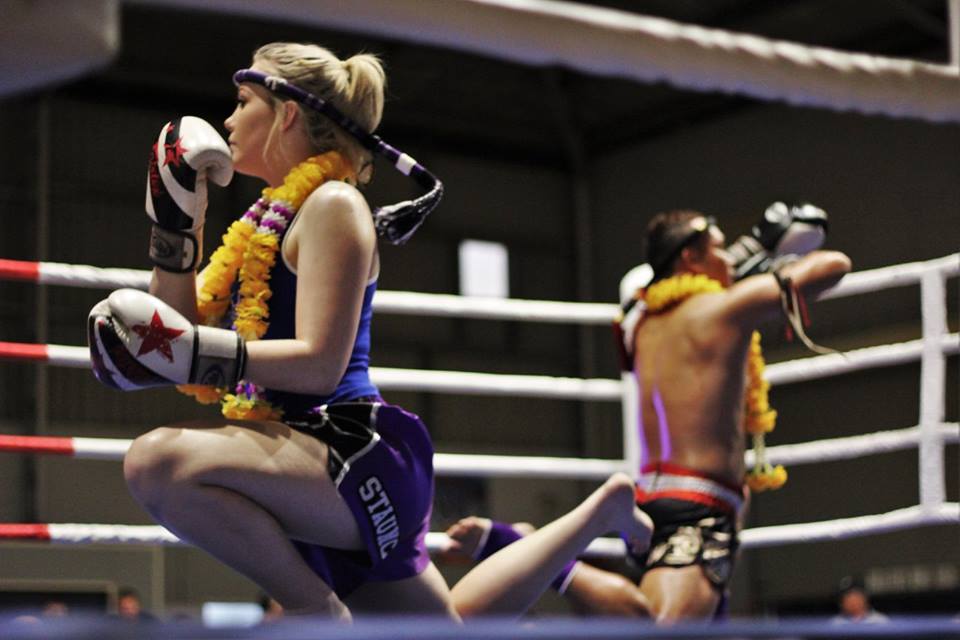 Jennifer Cavanagh is a veteran of thirty-one fights, fifteen of which were fought in Thailand, the home of Muay Thai.

“I had my first fight at twenty-nine – late! I was dragged into a gym by my boyfriend at twenty-four, and I stayed. I had [had] around five fights by the age of twenty-five, and then took time off when I had my daughter.

“After about a four-year break, I got back into it and had another twenty-five-odd fights. I lived in Thailand for a year and had fifteen. My daughter went with me; she’s got three fights under her belt, too.”

Jennifer became the foreign liaison at the Patong Stadium Gym in exchange for a small amount of money, room, board and the ability to train to fight.

“My daughter Alana was fifteen. She had finished year ten, so over we went. I put her into school there to learn the Thai language.”

Both Jen and her daughter trained in the gym and ultimately fought at Patong Stadium.

“[Alana] had her first five-round, Full Thai Rules fight in Thailand. She lost on points, but fought very well. She fought an experienced twenty-five-year-old Italian lady. We fought on the same night.”

As far as training women is concerned, Jen is in accord with Angie Parr.

“It’s sometimes different to training a man, but you try not to treat them differently. You can’t make it easier. When training fighters, there’s one rule. The minute they say they want to fight, they have to do everything the same as a man. It’s the same amount of fighting and hard sparring. There’s no easy road.”

“The minute they say they want to fight, they have to do everything the same as a man. It’s the same amount of fighting and hard sparring. There’s no easy road.”

Physiological differences mean training has to be different in subtle ways.

“They can’t do the same amount of strength and conditioning, but they must do the same program. I don’t expect a woman to match a man of her weight, but she can still do the same [work] to the best of her ability. After all, they’re doing the same thing; they’re fighting Muay Thai.”

According to Jennifer, any differences in participation are reflected in different targeting.

“Chest protection will change things, but the breast area is a low-target area compared to the face, legs or ribs. You can get the occasional push kick [to the chest]. It hurts; not as much as [being kicked] downstairs, but it does hurt at the time.

“Women wear a groin guard when they fight. It’s a different shape; flat and curved, not like a box to fit something in. It’s a thicker foam to prevent bone-on-bone contact. Normally, you’ll get hit with a knee, if anything.”

Women’s Muay Thai has grown in popularity due to the fact it generates a similar interest amongst fight fans. While the AFL is patting itself on the back for instituting a women’s competition, fight shows have featured – and headlined – women fighters for years.

“Women can go as far as they want,” says Jen. “One of my rules is that if someone wants to do it, man or woman, I take them seriously, but they have to demonstrate dedication. A lot of hard work goes into it. The ten minutes inside the ring is glamorous, but the time outside is not.

“You’re sore, bruised, battered; you have to cut weight. It’s an unglamorous lifestyle and women who want to fight need to understand that. It’s going to hurt – a lot – before they get Facebook photos and trophies.”

Increased public interest has meant a higher standard is necessary.

“It’s so different these days; so popular. There are so many people [fighting and training]. You’ve got to be good to get in there; you can’t just get in for fun. Women have to be good so they don’t get hurt and can perform at a satisfactory level.” 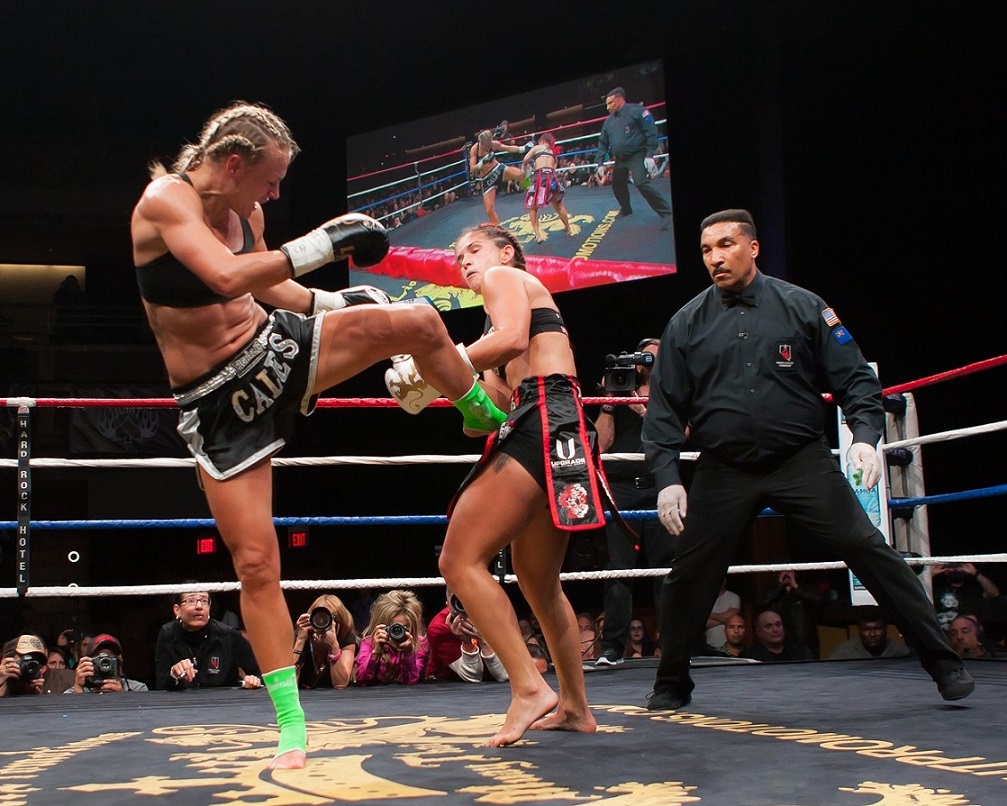 “Personally, don’t think there’s any difference,” says Caley Reece, veteran of over fifty fights and boasting a professional record that is without blemish.

“It’s really important they [girls] train and spar and grapple with people bigger and stronger than they are. When they fight a girl, it’s a lot easier because they’ve done the hard hours [against men] in the gym.”

At Riddler’s, the tasks are the same as the expectations; consistent across the sexes.

“Conditioning is the same,” says Caley. “We do a lot of punches to the body. Certain times of month are more difficult, but no one complains. You just get on with it. If you get through, it makes you that little bit stronger.”

There is no distinction between attacking a man or a woman.

According to Caley, a woman’s body is no softer or more sensitive than a man’s.

“I don’t think there is any area on a woman that is more vulnerable. If you condition properly, you shouldn’t be any softer than what a guy is.”

That said, some areas are more sensitive than others.

“I’ve been hit in the chest a few times, and it’s bearable. It’s not something you’d stop for. You might stop in sparring to adjust, but it’s not the same as being hit in the groin. It shouldn’t make you stop. You never wear a chest guard. You’re not aiming for it, anyway.”

There are few inherent psychological differences between a man and a woman, although Caley believes men are more prone to pride getting in the way.

“A guy’s pride and ego is more important than what a girl’s is. Guys need to show pride, whereas girls do the sport because they love it. They’re not so concerned if they lose in front of their friends.”

The primary difference between training men and women, says Caley, is in the weight cut.

“The weight cut is a lot different for girls. Guys, when they start to cut, can pretty much do it the same way every time. For a woman, their weight fluctuates during the month. I used to have to consult the calendar to work it out.

“Because of the period and fluid retention, we have to plan ahead. At some times of the month, there can be between half and one and a half

Because of the period and fluid retention, we have to plan ahead. At some times of the month, there can be between half and one and a half

“Because of the period and fluid retention, we have to plan ahead. At some times of the month, there can be between half and one and a half kilograms of difference. Losing it can be a big ask.”

As Muay Thai continues to grow in popularity in Australia, an increasing number of women will assert themselves in the sport as athletes first and women second. Just as there is little difference between a fight between skilful men and skilful women from a spectator’s point of view, the differences in participation for the fighters themselves are virtually negligible.

Just as there is little difference between a fight between skilful men and skilful women from a spectator’s point of view, the differences in participation for the fighters themselves are virtually negligible.

Just as there is little difference between a fight between skilful men and skilful women from a spectator’s point of view, the differences in participation for the fighters themselves are virtually negligible.