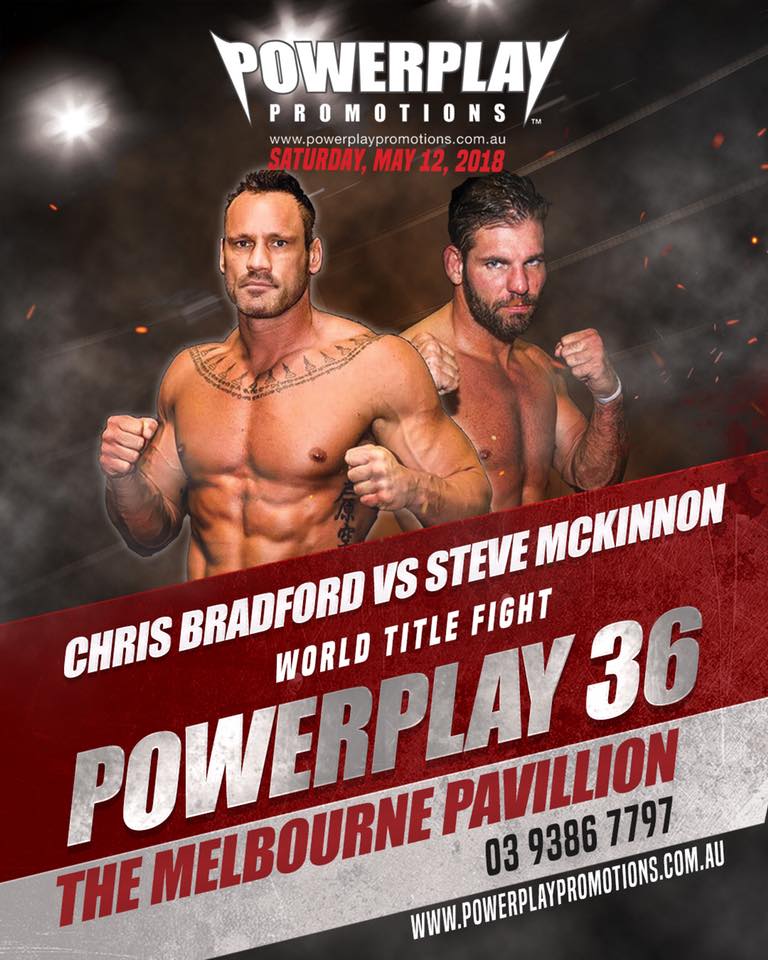 Chris Bradford meets one of the world’s best cruiserweight kickboxers on Saturday, May 12 of next year. He sits down to tell JARROD BOYLE all about it.

What made you decide to have another fight?

As a fighter, you never really quit the fight. It’s always in you: when you wake, when you sleep, when you walk. It’s instinctively in your blood. The thrill of fighting is something that can never be duplicated. There are only a handful of opportunities like this one to come along in your life.

Why Steve McKinnon? He’s a big fish and very active…

It’s simple. He is the opponent that was presented to me. As with all my fights, I’m willing fight anyone, no matter what their record is. I’ve knocked out people [with] bigger and better fight records than me before. So, as I always have, I’ll believe in myself, no matter how dark a place I go [to] in the fight.

When did you fight last? Are you going to have/have you had any warm-up fights before facing McKinnon?

I fought last November against Rob Ferguson on my own show, Prestige Fight Series. Firstly, I’ll say that was one nightmare I will never do again… promoting and fighting on your own show and running your own fighters is an absolute nightmare and I don’t recommend it for anyone at all!

It affected everything: my performance, my cardio, [and] my focus on the night, which is why I will never do it again. Rob is a tough bloody guy and I was lucky to come away with the win.

What rules are you fighting under?

I’m fighting Steve [under] K1 rules. Obviously, my favourite technique is the elbow – it has been my ‘go to’ technique my whole career, so it’s been very interesting trying to adjust on the pads already. Throwing elbows is instinctive to me!

How’s your gym going? Are you training other fighters at present?

Yeah, my gym is always active. There’s always a lot of fighters moving through and training up. I have a lot of government-sponsored programs on the go to help people better themselves and their lives.

On top of that, I’m helping people get fit to make a difference to themselves with my AK physical programs and developing positive nutritional habits. To top it off I’ve still got plenty of fighters coming through the system of TTMT, working hard and representing their gym with respect and honour.

What about bodybuilding? Your shape has changed considerably in the last few years. Has that impaired your ability to strike?

Has it impaired my ability? No. Has it slowed me down? Possibly a little. What I lost in speed I now make up for in power. This training camp will revolve around balancing the two. Being agile as a heavyweight while [still] hitting hard is the key. Steve has done that great over the years, which is why I’ll always respect him.

How is your body? How is the ankle? Will that require surgery? Is that something that will have to wait until retirement?

I’ve had some treatment over the last year on my ankle which has settled well for now. Surgery is still inevitable as I’ve busted it up too many times and I want to be able to walk later on in life! Stairs give me hell at moment. When I’m in the fight I don’t give a shit about all that though, so I’ll worry about it at another time.

What weight are you fighting at? Are you going to have to lose size to do this? Will you alter your training – more plyometrics, etcetera, to compensate?

The weight is set at 94kg. I walk around between 100kg and 102kg, depending on the stress levels of business. I’ll most likely be the smaller [fighter] but I’ve got a few tricks.

As I said before, the balance of size, power, and speed are key points for this fight. When it comes down to it though, I ain’t there to point it out. I’d rather knock him out or be knocked out. I have had no regard for my safety throughout my career and I won’t be starting now.

Has your fighting style changed as your physique has changed? How will you approach McKinnon? Will you be altering your style or doing anything different in training?

Let’s just say that I’m looking forward to K1. Not worrying about the clinch under Thai rules for a change will suit me well. I’m going to surprise a lot of people. Yes I’ll be the underdog, yes I’ll be expected to be defeated because of his experience, and yes, he is a world-class opponent.

However, this [situation] suits me to a ‘T’. I have nothing to lose and everything to gain. The more doubters I have the more fuel I have to burn in my training and the fight. The more people say I can’t, I’ll be working to prove I can. I’ve done it before and I can do it again. This is what the AK-47 is built on: self-belief and the drive to obtain your goal.

Will you return to fighting, is or this the ‘last time’?

Powerplay Promotions have looked after me and Joe [Nader] sees a small window of future. As I have tattooed on me – and I quote every time I go into a fight –

“Once More into the fray, Live and die on this day.”

If I live, I’ll probably go around again. Punching on in the ring is just too much damned fun.