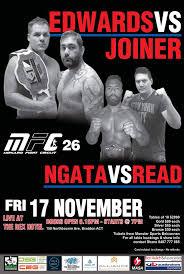 Ben Edwards is a beast. After making a significant impression on international heavyweight boxing and kickboxing, he is poised to make an elephantine splash at the deep end of the swimming pool of MMA. He fights Absolute MMA stalwart Jeremy Joiner this Friday night in Canberra on Monaro Fight Circuit 26

How’s life as an MMA fighter?

I’m loving being an MMA fighter now; I was into MMA before it caught on and before there was anywhere to train. It was a long time coming and it feels right to finally be doing it.

What about boxing and kickboxing?

I can’t see myself ever kickboxing or boxing again unless I get a crazy offer.

How did you feel about your debut performance against Brandon Sosoli?

I was happy with my first fight against Brandon. I picked a hard fight for my debut; a guy with a winning record [who has] ten [pro] fights experience and six amateurs. I was happy I got out of two bad situations; my fitness held up and I still got the KO. I’d much rather [have to] overcome a bad situation for my first fight than a quick KO win.

What are the weak points of your game?

Obviously my wrestling and grappling. Everyone is going to have the same game-plan against me; take me down. If I can have an 80%-plus KO ratio in 10oz gloves, I’ll kill people in 4oz MMA gloves.

It’s great to be learning new things every day! My ego is in the back seat – it has to be – because I’m rolling with guys better than me all the time and I’m learning from them. Fast.

Is Jiu-Jitsu a difficult skill-set for a striker to step into?

The jitz seems to come very naturally for me. I’m still a beginner, but as my coach [Duke Didier] said when I first started ‘Your instincts are awesome; it’s the execution that needs work.’ I was good at grabbing a limb but not great at ripping it off, shall we say.

What’s your prep for Jeremy Joiner?

I’m keeping my striking tools sharp. Striking in MMA with the threat of a takedown is very different to a boxing or kickboxing match, especially for someone like me who really sits down on my punches. Punching and defending with MMA gloves is very different as well. I am working on all aspects of my game all the time.

How have you adjusted your style for MMA?

Concentrating on speed rather than power for kicks to prevent an opponent grabbing your leg and taking you down. I believe Olympic-style boxing is better for MMA than a professional style, especially [the volume punching] Mexican style.

I try to get in and get out, just touching the opponent. There’s no need to load up your shots in small gloves, especially as a heavyweight. Just fast and accurate.

How do you approach sparring in light of recent research into CTE and brain damage in contact sports?

Just concentrate on having really good basics, same as what I do for my jits. The focus is on play or light sparring all the time and very rarely spar hard. Getting punched in the head every day in training is stupid and even if you’re wearing headgear, your brain is still bouncing around. Despite what the old boxing heads say, you can fight hard and have good timing without hard sparring.