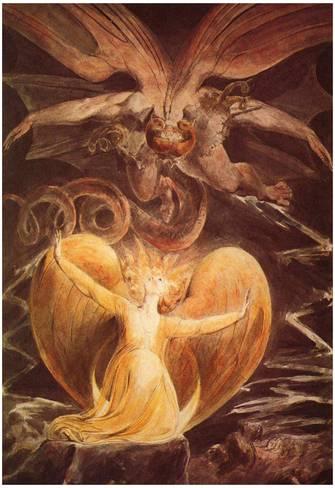 By the next morning, I felt physically sick and exhausted. I went to the dispensary and took the thimble of turgid green medicine. As the taste worked its way into my guts as a filament of revulsion, I considered giving the final session a miss. I figured that I’d gotten what I’d come for and maybe it was time to stop punishing myself.

On the other hand, maybe I’m not supposed to enjoy it. Maybe it was supposed to be an ordeal. I hadn’t experienced any visions, so maybe I needed to increase the dosage. After all, the girls I’d heard throwing up had experienced actual visions.

I spent the afternoon lying around the malocca, stretching out my spine on the hard wooden floor and slowly working my ribs back to where they should be. I re-read The Marriage of Heaven and Hell as I did so.

Maybe the ceremony isn’t something to be enjoyed, I thought to myself. I’ve signed on for three and I need to take more. Go deeper. I resolved not to shit my pants again at any cost and to buckle up and do it right.

At seven that night, once the dark had settled over the jungle and the seam of the horizon had closed, the electricity of a storm crept through the air. We took our places – I was late and ended up on the side of the room I’d prefer not to have been on, but I settled and got comfortable.

According to my traveling companion Jack, the maximum dosage taken by war veterans to get them where they needed to go was six cups. When I knelt in front of the shaman, I held up two fingers for kick-off.

Once I returned to my mat, fatigue settled over me. I felt my mind rev harder and harder, brain spinning like a centrifuge, thoughts whipping against the walls of my skull. Once the candles were extinguished, we descended into our dreams. The storm breathed the jungle through the mesh walls of the malocca.

I don’t remember altogether that much of the first half of the ceremony. I do remember experiencing visions of extreme violence. Jack the Ripper type stuff. Some of the visions were so degrading and repulsive I reeled from them, opening my eyes on the cover of night.

I thought I could see what looked like webs impaneled in the darkness, rectangular and suspended like tapestries between vertical posts holding up the roof of the malocca.

They had become visible earlier and now, red and yellow light glinted off the threads. They weren’t so thick as to be visible on their own account; it was more a matter of the way they modeled the light as it passed through the threads of their design.

“What are they for?’ I asked myself.

“They’re for your protection,’ came the answer.

“I don’t need to be protected from the shadows in my own head,’ I replied to what I thought was myself.

The time came when the shaman asked if we needed a second dose and those who wished to partake went forward.

“How much do you want?” asked Carolina, the facilitator. “A quarter? A half?”

“Full.” I was determined to go as far as I could.